Dixon Middle School, in Provo, Utah, is one of two middle schools in Provo City School District, educating students in the 7th and 8th grades. The school first opened its doors to students in March 1931 as Dixon Junior High School, and, along with Farrer Junior High School – which opened the same year – were the first junior high schools in the district.

John Matthews, who served as principal at Dixon from 1967 to 1969, and from 1970 to 1973, stated “Dixon Junior High School commemorated its 36th birthday on March 3rd of this year, 1967. This is not old for the life of an institution; but the founding of Dixon, along with her sister school – the Farrer, represented a great step forward in the history of education in Provo. Up until that time the junior high school program was the step-child of Provo’s school system, which lagged behind many communities of the state.” 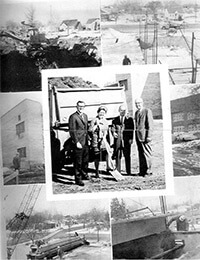 “During the decade prior to Dixon’s birth, all grades above the sixth were at Provo High School, with junior and senior high levels functioning under the same principal and taught by the same faculty. This organization was improved in 1927 when two different principals were appointed for the two age groups who were still, however, using the same plant, same teachers, and the same campus.”

So the need for separate junior high school facilities at that time was urgent. In 1929, the voters of Provo gave approval for the board of education of Provo City Schools to sell bonds of $225,000 to finance the erection of two junior high schools in the community. To serve the west side of Provo, a site was selected on February 17, 1930, and purchase of the land was begun. Joseph Nelson was designated architect; and the contract for the building was finally awarded to the lowest bidder (the firm of Cox and Christiansen) for $85,000 on June 30, 1930. Construction was begun immediately and the classrooms were occupied on March 7, 1931 (even though the building was not accepted as complete by the board of education until August 4,1931). 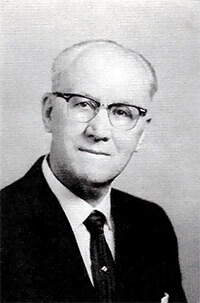 John F. Mower, who, prior to the 1930-31 school year served as principal of Franklin School, was appointed principal at Dixon, and headed a staff of seventeen teachers when the school opened. Principal Mower became known as “Mr. Junior High School” of Utah, and served as Dixon’s principal until the spring of 1963, winning the love and respect of the whole community. His thirty-two year tenure as principal is unprecedented in the school’s history.Interestingly, the naming of the school created a bit of confusion for some Provo residents. On December 4, 1930 the board of education agreed “that we name the new building on the west side of the city the Dixon Junior High School in recognition of the pioneer family of that section who have contributed much to the welfare of the community and the schools.” 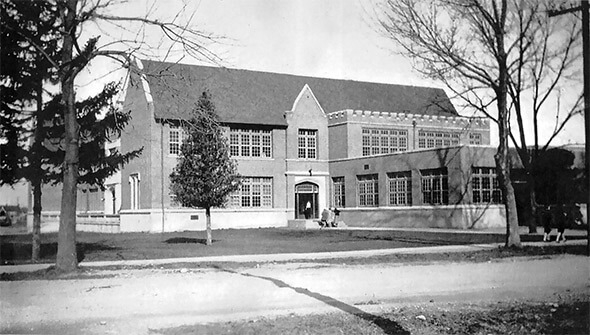 The most conspicuous contribution was the appointment of Henry Aldous Dixon (1890-1967) as superintendent of Provo City Schools on March 25, 1932, a position he formerly held for nearly four years (1920 to 1923). He served as superintendent until June 30, 1937. However, as noted, the school was not named specifically after him, but rather the Dixon family, of which he was a descendant (his grandfather, Henry Aldous Dixon, born in 1835, was the patriarch of the Dixon family which settled in Provo). It was this larger family organization for which the school was named.

Decades of Growth, Expansion, and Change 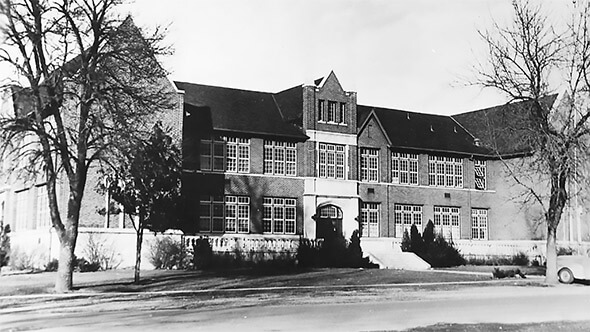 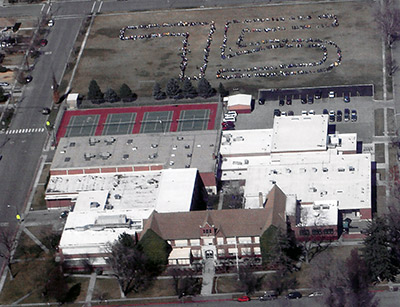 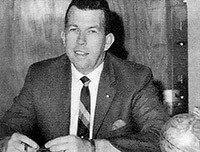 Increasing property values and inflation were an economic reality even in the early years of Dixon’s existence. In 1943, the board of education ordered an estimate on school building values. By this time, twelve years later, Dixon Junior High School was estimated to be worth $130,000, while the furniture, fixtures and other equipment were valued at an additional $20,000.As city growth resulted in increased enrollment at Dixon, it became necessary to add major structural additions to the building. In 1949, a new wing was built which gave the school six additional classrooms. In 1963, an even larger expansion program was begun, providing a new library, two adjoining gymnasiums (which doubled as an auditorium), a new lunch unit, music rooms, and eight additional classrooms.Not long following the new building expansion, the board of education purchased the last section of private property on the block north of the school. The city granted permission to close off the road between the two city blocks, resulting in one large quadrant of land that would provide sufficient room for physical education and recreational facilities in cooperation with Provo City.

Numerous smaller additions and changes to the physical plant of Dixon Middle School have taken place during the 1990’s and early 2000’s: a new auditorium facility with adjacent classrooms has been added; several other classrooms were renovated, such as remodeling and equipping the sewing and food preparation classrooms with modern equipment and appliances. The labs and shop facilities have also seen important upgrades.Ronald Last succeeded Principal Mower, and the school’s staff soon increased to 48 teachers, secretarial staff, custodians, and lunch workers. Dixon’s enrollment had also increased to 875 students by the mid – 1960’s. The succession of principals accelerated after this period, with John Matthews, Lee Crab, J. Merrell Hansen and others who held this position through the 1980’s. In the 1990’s, Bob Gentry was appointed principal and served for fourteen years, followed by Rosanna Ungerman and Jarod Sites, who serves as Dixon’s principal today. 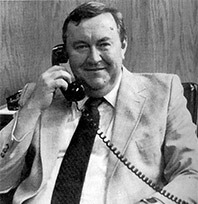 Dixon has also dealt with growing pains elsewhere in the district. In the early 2000’s, the board of education adopted a 10-year master plan that would convert Farrer Middle School into an elementary school for former Joaquin Elementary students. Having already built Centennial Middle School in northeast Provo, the district no longer had the student population to support three middle schools, which meant that student populations at Dixon and Centennial would increase. This required consolidating the staffs of three middle schools into two, and carefully assigning teachers and support staff to each school so that the instructional needs of students were met according to state rules and regulations. This significant realignment was approved by the board of education in November 2004, and was implemented beginning with the 2005-06 school year.By the late 2000’s, therefore, the district’s alignment had evolved so that Amelia Earhart, Franklin, Lakeview, Sunset View, Timpanogos, and Westridge elementary schools flowed into Dixon, which by this time had long since transitioned to middle school status instead of a junior high school. This change also meant that Dixon serves students in 7th and 8th grade instead of 7th through 9th grade. Upon completion of 8th grade, Dixon Middle School students transition to Provo High School.

Building a Tradition of Excellence 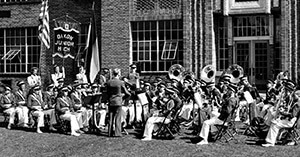 It did not take long for the Provo community to realize the benefits its two new junior high schools. Under Principal Mower’s leadership, Dixon cultivated an outstanding, diverse faculty and established programs that promoted individual growth, opportunity, and expression. The Dixon Junior High Band, for example, resplendent in their full-dress uniforms, quickly became known for the quality of their concerts, and routinely participated in local parades, festivals, and other community events. Early film archives document the band marching along Center St. and University Ave. in Provo on many such occasions. 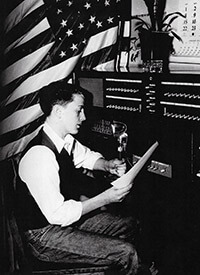 The school’s classes in sewing and fashion design developed into some of the finest in the state – annual fashion shows were held each year where students made dresses in the latest designs and modeled them for parents and the community. Dixon’s art programs excelled, and over time, the school’s collection became the largest in the district, with over 125 paintings, many from noted local artists.

To highlight only a few, Dixon has received numerous recognitions and awards in recent years: 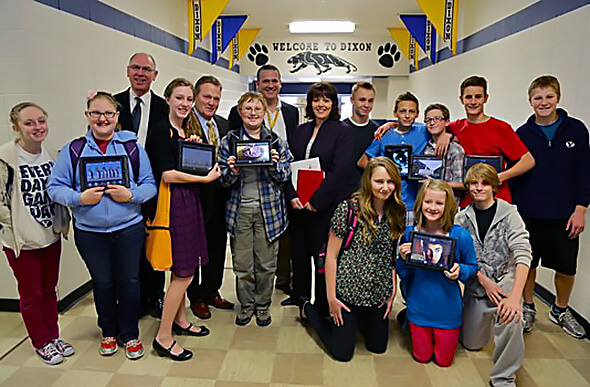 Dixon has many other points of interest – early on, the school became known for its infamous “dungeon” – the basement is laid out in a series of tunnels and this maze of tunnels soon acquired the reputation of a haunted dungeon. Student tours of the tunnels were provided when the school celebrated it’s 80th anniversary in 2011. Patrons who attended this anniversary celebration event were also given tours of these “Hidden Places of Dixon”. 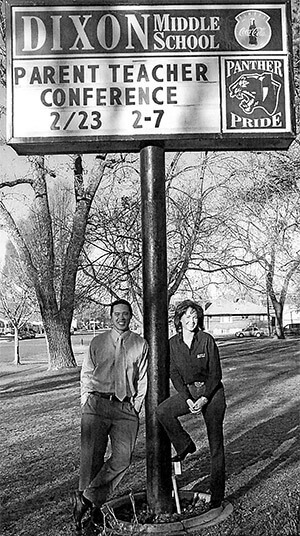 Dixon has also been acknowledged for leadership in school policy and social innovation. Dress codes for teenage students had long been a community concern, and in 2008, the dress code committee, school administration, and district officials agreed to introduce a new dress code for all Dixon students that allowed modest jeans, along with numerous options for other clothing and jewelry. Principal Ungerman noted that the new code involved input from approximately 300 parents and hundreds of surveys from sixth and seventh grade students, teachers, PTA members, and community council members. Once students and parents realized that this effort was not about “uniforms” and was begun in a fair-minded manner, it was received well.

In addition to the school-wide dress code, Dixon later established a “Dress for Success” day on Tuesday of each week. On this day, students and teachers are encouraged to “Dress Up!” meaning that boys would often wear shirts and ties, and girls wear dresses or skirts. Fun Dress Up days, such as Hat Day or Hawaiian Day, sometimes are designated for variety.

Dixon was one of the state’s first middle schools to offer its students Reality Town, a hands-on simulation designed to encourage students to explore career choices and set goals for the future. They are required to compose a resume, complete a job application, create a budget, balance a checkbook, and understand the many financial obligations adults face. The program helps students understand that the choices they make now can and will affect their future.

A service project begun in 2000 offered seventh grade students the opportunity to each year create thousands of hygiene kits and make clothing items for impoverished children in a hospital in Morelia, Mexico. Another service project in 2012 involved 70 members of the Dixon Honor Society. These students created more than 100 Christmas cards and letters expressing thanks and gratitude to those serving in our armed forces overseas. These are just two examples of the many service opportunities Dixon students have each year to serve those within and outside of the Provo community.

If you are interested in applying for Honor Society Applications are available for the Dixon Honors Society.  You can obtain these from Mrs. Moody in room 100.  This is a fun organizations for students who want to do service and have  3.5 or higher GPA. These are due Oct. 30 2019.  They will do service projects as well at attend the Nutcracker Ballet in December and go to the museums at Thanksgiving Point in March.  There will also be a writing workshop in February with a local author.